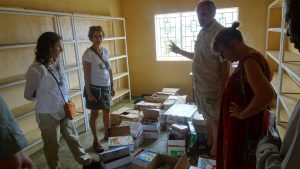 It looks like a great mess, but this is the beginning of a new library for Kapita School! We are so grateful to our sponsors and donors who provided for the shelving and books for Kapita’s new library. It all started in 2014, when the head teacher of Kapita, Gilbert Mwale, visited Spain thanks to a special invitation by the American School of Valencia. He was so taken with their library that he had dreamt of creating one for Kapita every since. 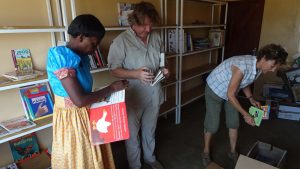 Once the shelves were installed, the first job was getting the books out of the boxes that Project Luangwa had been saving and to categorize them. 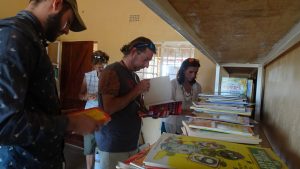 Sometimes we found it difficult to decide which book should go where. We are lucky to have an extensive selection of children’s stories as well as scientific collections. Having these books brings the world into Kapita School. The students will read about animals, the weather, and geography and open up their imaginations to the great world beyond.

Joyce Mchenga, deputy head teacher at the time of our visit, is taking a moment to read through one of the books. I think the teachers enjoy the new library just as much as the students! 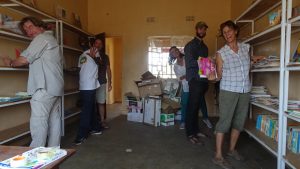 The task seemed daunting but we all kept working away, emptying box after box, and organizing the books onto different shelves according to subject matter. 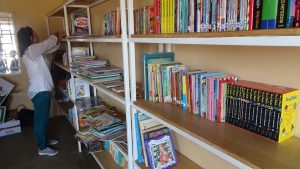 María worked diligently at organizing the preschool section. And Kapita’s spare room little by little was converted into a library: a place for children to feel like scholars and part of the bigger world beyond their four walls. 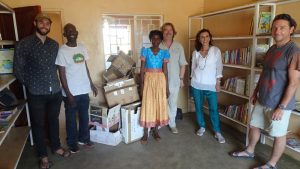 Finally! The boxes were empty and all the books were all sorted and shelved. The library was ready to share its treasures. We all felt luck to have been a part of something as life-changing as a brand new school library where before there had been none. Gilbert Mwale’s dream has become a reality! 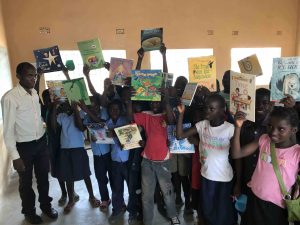 Here is the sixth grade, saying thank you to all our donors! Soon they will have library hours and special visits when they can read the books and be involved in library activities. Stay tuned .. next on our blog: librarian training for local graduates who aspired to work at the Kapita Library.