Elena González was awarded “Worker of the Year” from Livingstone Partners international offices. As a reward she was given a trip to visit our Foundation’s projects in Zambia. She has shared her experiences from the trip and given us permission to publish her notes on our blog.

TRIP TO ZAMBIA – THE COUNTRY OF HAPPINESS

It has been hard for me to come back to reality after such an overwhelming trip to such an amazing country, my first time in Africa. I have to confess I was a little nervous, but it was due of a lack of knowledge of how safe and easy the experience was going to be. I did anticipate adventure, and that I got!

My trip took place from the 28 of April to the 8 of May. Summer clothes packed, an oversized first-aid kit and malaria pills taken, my friend Marja and I embarked on our long trip. I thoroughly enjoyed my first trip on an A380, seeing the skyscrapers of Dubai, and the desert… And once in Lusaka, the adventure really began, with a flight on a tiny but well maintained aircraft, where the flight attendant was so very nice that he fulfilled the role of 3 people and made us feel very safe and welcome. 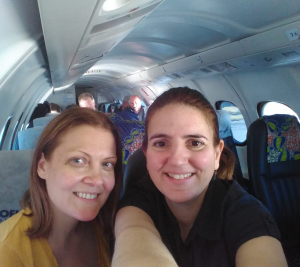 Flight from Lusaka to Mfuwe

That was just one of the first experiences of the people from Zambia, who are so welcoming and friendly, always ready to talk, ask, help, learn, and clearly enjoy meeting foreigners. Children don’t cry in this country, was my friend’s first remark. They travel along with their mums in those slings, and never have any fear or want because they feel safe and cared for. Older kids are very well behaved, friendly, very quiet and respectful, as we had the chance to see later in the trip. So different to what we are used to in Spain! Before the trip, we had learnt about their challenges in getting a proper level of education, especially in maths, where if they miss school through illness or chores, they fall behind and are unable to catch up to the levels taught year after year. Fortunately, many things have changed in the areas where Livingstone Foundation has set its sights. 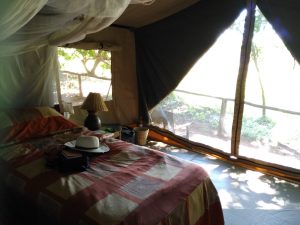 View from inside tent, the Luangwa river is just beyond with Hippos and crocodiles!

Reaching our camp – Flatdogs Camp – (later I learnt that “flatdogs” is the name given to crocodiles, which would have made me be more wary, especially if I had known before that they were frequent visitors of the place at night), we were greeted and given our “safety instructions” by Lydia, a wonderful lady who helped us feel at home: “– do not go out at night on your own, always call one of our guards with a torch – do not leave your tent’s zipper open, or unlocked, or with the key in… monkeys and baboons are well trained to open anything and they enjoy getting in – do not leave any personal belongings in the bathroom, because as it is open to the exterior monkeys will get in and have a great time with your toiletries, including their much beloved “toothpaste feast” – but above anything, beware of the bigger animals both day and night.”

Hippos were singing loud into the night when we arrived, and we still didn’t recognize what sort of beast was making that noise. Discovering all the exuberant nature and animal life with the first light of the next day, was an experience I will not forget! A huge family of hippos was swimming across from our tent, and… seeing hippos for the first time so close is impressive… although it loses some impressiveness by the third day, as hippos are everywhere along the Luangwa river. There are more hippos than river-stones. 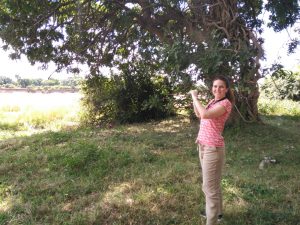 Elena, enjoying the view of the Luangwa River in front of the camp

The Luangwa is the only river of Zambia that is free of any human intervention along all its banks. It is therefore as full of nature – wild animals and plants – as it used to be hundreds of years ago. And you get that sensation of untouched nature everywhere you go, which really impacts you. Dozens of types of different birds, big and small, monkeys, elephants, hippos, reptiles… you didn’t need the safaris to get that impression, but the safaris just increased that feeling with the sight of lions, crocodiles, buffalos, leopards, zebras and giraffes. Everything could be seen by following the guiding finger of our friend Kennedy, our ranger for the day and night safaris we did next to Flatdogs, at the South Luangwa National Park.

As well as the spectacular nature, we really enjoyed meeting with the people that make it possible to complete the projects of Livingstone Foundation. Karen and Dave are two British expats that moved to Luangwa many years ago, and they have been very successful in channeling investment and purchases of tourists into amazing projects that have improved life for children and families in the region. They let us know how grateful the communities were around the area of the Kapita School, where Livingstone Foundation has built the new school, the library and implemented the Edulution Maths program for all its students. 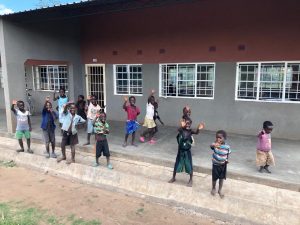 Kapita School was not too far away from the camp, though the dirt roads and the potholes these get during the rainy season make distances seem so much longer than they are. The school is attended by up to 600 children in morning and evening shifts, up to the end of primary education. We saw a few of the kids that live in the huts nearby the school, who usually go to the playground there to play with their footballs, made of various layers of plastic bags. Fortunately, we brought some balls in our bag. Now we understood the importance of such small details. On the way there, we discovered how building the wells for water supply in the area surrounding the school had been key for hundreds of families who lived nearby, and had their daily lives eased. But the flow of water was now changing and they were concerned about current water supply. 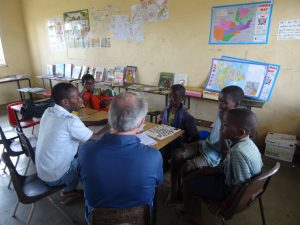 Small group lesson, very needed when the classes are so large!

We were met and shown around  by the Headmaster, Mr. Gilbert. He was happy to get new books for the library, school material, “reward badges” (yes! We found a few of these in Spain! And the reward stickers were in English!). We were told about the very poor levels of Zambian students in Maths. How this is now being tackled with the program of “Edulution”, which provides software, installed in tablets, and updated every now and then to teach basic maths and measure and follow children’s progress. The program in Zambia is funded by donations and with these, the older students (secondary or higher education) who are good at maths, can tutor, teach and supervise the younger students, and they get paid as these children keep improving and getting better results. The implementation of Edulution in the whole of Kapita School was funded in its entirety  by Livingstone Partners and Gilbert told us that in no time they have gone from an average grade of 10% in Maths to over 50%, proving the success of this program. Now many more children of this area can qualify for secondary school, where Math results have been a very important barrier for these children. 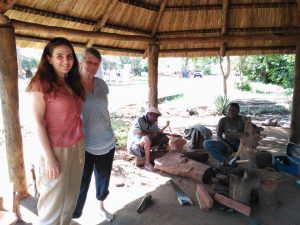 At Project Luangwa office and shop, the base of Karen and Dave, who had accompanied us to the school, we saw the way women and men were trained at different crafts: sewing, wood carving, basketry, metal working… All sorts of wonderful things, very adapted to European taste, but keeping their traditional and ethnic looks,The monies raised from the shop goes principally to help fund a young girls program. One of the days of our stay we met Mailess, a girl sponsored by Jeroen and Zulema Rijk, who became our travel companions after the third day. 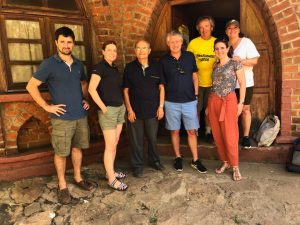 At Chikowa with Brother Francisco who runs the program, in the yellow shirt and on either side Jeroen and Zulema.

With Jeroen and Zulema, we had the chance to travel further, to the Chikowa Trade School, where Jeroen has managed to organize through Ritchie Brothers International Auctioneers the donation of tools and large machinery to Chikowa.  There we meet fathers Francisco and Luigi and their volunteer Antoine, and saw the wonderful educational community which they have created there, and which hosts over 100 students learning different trades: wood working and cabinetry, auto-mechanics, building and agriculture. The place was the most fantastic and well organized “Hacienda” which I have ever seen, and through generating its own products (both from the ground and from their workshops, which they sell into small businesses and hotels in the area) helps to subsidize and sustain all the students that come to learn one of the yearly courses offered by this Mission. 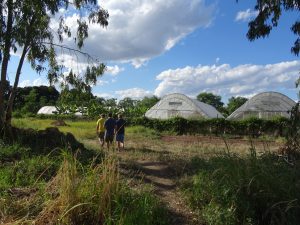 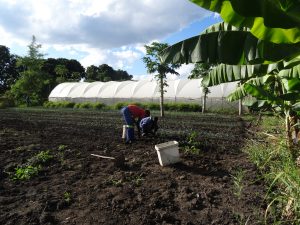 After a long walk around the facilities to see each of the classes, dining room and computer class, I could see the greenhouses, so long, so big, and as far as my feet were concerned, so distant. But band aids were a great help, and walking around the different plantations provided lots of learning. Livingstone Foundation had provided the School with a number of greenhouses where lots of various species of greens, vegetables and salad are now cultivated at all times of the year, which was not possible before. We have also provided agricultural machinery to lighten the workload. I also got the chance to identify films, shade nets, thermal screens, all these things done by some of our former Southern Spanish clients;- )

On the sixth day, we travelled to Livingstone and visited Victoria Falls. We enjoyed the views of the roaring water of the Mosi au Tunya (“The Thunder that Roars”. We got soaked, even with the rented raincoats. Our cameras survived! The views of the top of the waterfall at dusk was the most beautiful sight that I think my eyes will ever see. The Livingstone museum had plenty of materials to learn about the country, colonial times and how these begun, in this case, as an English protectorate to defend them from very probable colonization by the Portuguese settled at both sides of Rhodesia. We saw the Dr. Livingstone room, with plenty of memorabilia and letters. The city had many old buildings constructed at the time the city was founded, and the looks of it were very peculiar. We had a great time bartering for crafts at the market. 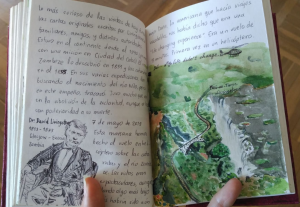 Everywhere, consumption as known in Europe was kept to the minimum expression. No plastics, no packages, no cigarettes, no filth. Clean and pure places, amazing sights, joy, peace, exuberance… This country has been the source of so many new impressions and things to reflect upon. I would definitely like to come back. In the meanwhile, I’m travelling again, this time along the words and memories of Mr. Livingstone himself  downloaded to my kindle. And thinking about the truly positive impact that we at Livingstone have achieved in such a remote area.

Thank you Elena for your heartfelt and enthusiastic account of your trip to Zambia!